I have been pondering how to introduce myself and what subject to tackle first. So, what better way to begin than to start with a SHOW + TELL of some of my own past interior design makeovers. While, of late, I focus primarily on my own accessory lines, I have spent many years as an ASID interior designer. I love Before and After's, so I went back to my own archives to SHOW some of my own B+A with you. Keep in mind, I'm drawn to extreme makeovers. 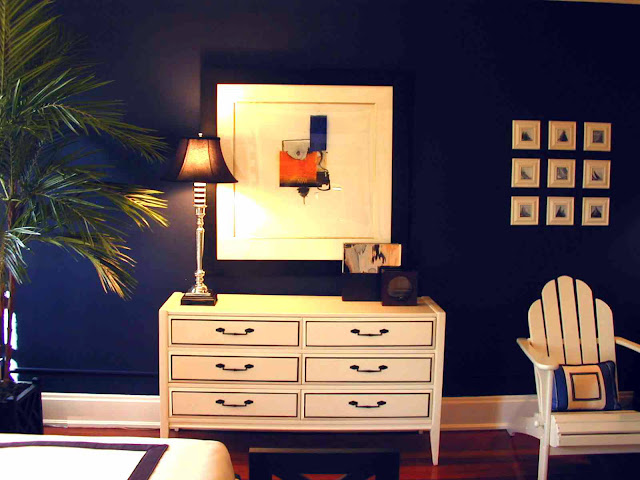 In 2003 I participated in the St. Margarets Guild Decorator Show House in Indianapolis. This was a bedroom that had previously been the older sister's space, but now that she was away at college, the 13 year old brother inherited a bigger room with a much needed redo. Since he was going to be using this room for the next several years, I wanted to design a space that would serve him well for several years. His love for sports, his cleancut personality and the home's architecture led to many of my choices for this space.


The color choices were navy, cream, black and a splash of orange which gave it a Nantucket feel. I made a custom upholstered bed with a dramatic headboard. The feminine cubby/extra sleeping area and painted-one-two-many-times lower storage was replaced with new cabinetry and privacy curtains held up with boat cleats . I salvaged the dresser with paint, a navy banding on drawers and stripped the paint off the hardware. By moving it to the longer wall I was able to make a casual seating area reminiscent of the deck on a lake cottage. Finally I removed the former make-up area and added a built-in workstation. I was honored with the First Place Key Award and the room was featured in the Indianapolis Monthly magazine.


So , that's the first installment. Just a little snippet into who is behind this blog.
Posted by Unknown on Monday, February 18, 2008