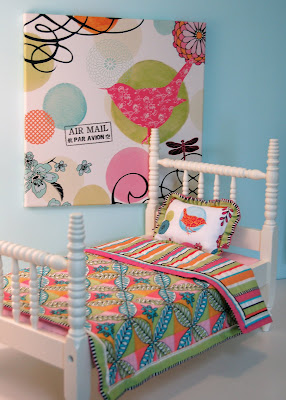 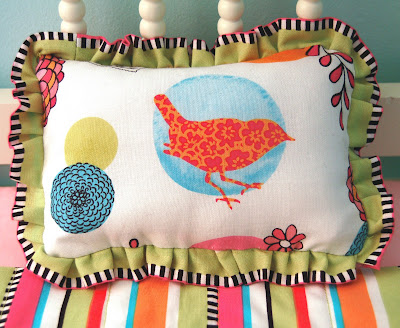 Better late than never, right? This was the doll quilt and pillow I made for Amelia to go with the doll bed we gave her this Christmas. Problem was that I didn't get a good photo before since I was working on it until the last minute. I must say I had trouble. I used to sew all the time when the kids were young, but not only am I rusty, so is my my old, old sewing machine. I used a new machine that Jennifer had just purchased. I won't say which brand, but it had A Little Engine That Couldn't. It wouldn't go over the slightest thickness and I spent more time tearing out hard balls of stitching on the reverse side than I spent sewing. Thank goodness, Mia was thrilled and did not critique my labors.
So I decided it was time for me to join the sewing world again. For years now I had professional sewing rooms sew or upholster all my creations. And years before that I learned heirloom quilting and don't even know how to machine quilt. Pretty sad, huh? I LOVE creating and handwork, so guess what I got for Christmas???
a 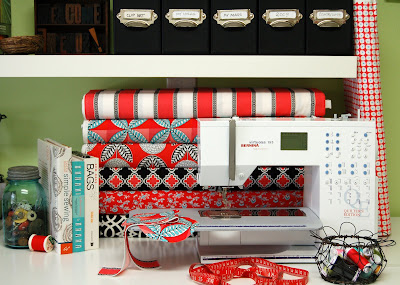 I bought a pre-owned Bernina virtuosa 153, Quilter's Edition. I hope that was a good decision for me. I researched at least what I thought I'd like to be able to do and the amount I could spend. I know it's an older machine, but the person who owned it took excellent care. I will be able to take classes, and I'll sure share any attempts. I imagine I'll start small, because I'm a bit intimidated. My very old machine did straight, zig zag, primitive button holes and that's about it. This one, though older has lots of bells and whistles I never had. I might be asking for advise.

Tomorrow is my First Blog Anniversary. I'm thinking of how I should celebrate. Any ideas?

Email ThisBlogThis!Share to TwitterShare to FacebookShare to Pinterest
Labels: SEWING