ALL OVER THE PLACE SHOW + TELL 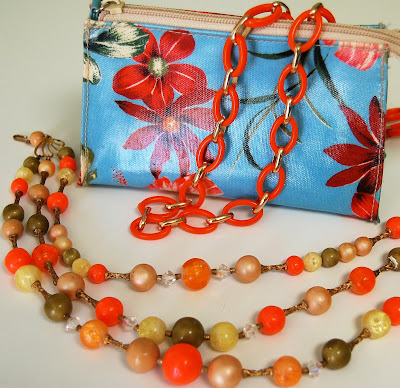 What's a gal TO DO when her list of TO DO'S is too long? Escape! Tim and I spent some time wandering around an antique store, just for the fun of it. Spent a little over $10. The jewelry is vintage. I kept the beaded necklace and gave the orange and gold chain to Jennifer. She squealed..same as a huge "thank you" in my book. I'm sure the little bag is new, but couldn't pass it up. So, that's what I got. AND this is what I did NOT get. 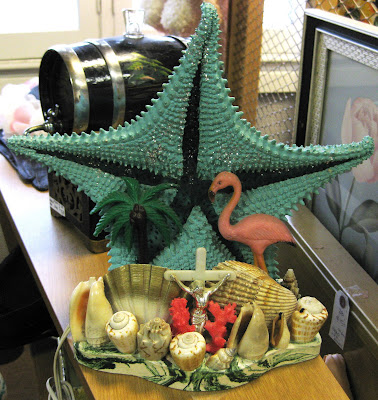 Tim was almost disturbed by this. He couldn't get over it, so I suggested he use his new handy-dandy camera and snap a picture, so he could continue to critique it later. The picture isn't great, but I bet you get the idea. It's maybe a shrine to either Jesus or Florida, or both? The ceramic keg behind it was a separate lovely find.


On to something much more pleasant for your viewing pleasure. Kristen from Gock's Frocks made some adorable skirts out of my Flights of Fancy...cute, huh? She did a great job mixing ribbons and fabrics together, didn't she? 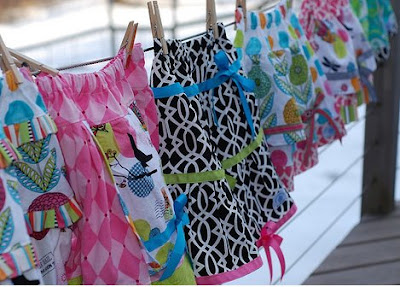 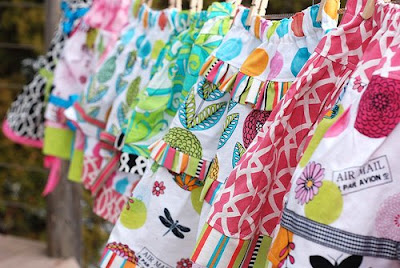 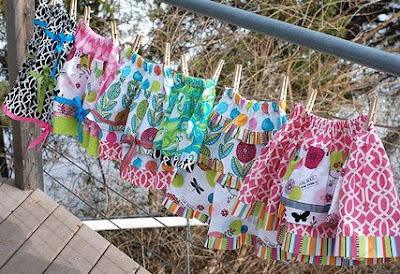 I don't think I've ever introduced you to my Tashi. On Thurs. we realized Tashi had been gnawing at himself and it was infected. Once I got in to the vet's, next thing I know we have a head cone, medicine, salve, and diapers to prevent the salve from spreading on furniture, carpet, etc. as Tashi is obsessive...he'll freak and try to remove anything he didn't put there himself.
We had to nix the diaper, as he was SSOOOO freaked. So Nurse Paula has covered the sofa and made a sick bed for him to recover. We hand feed him, wipe his chin when he drinks and scritch his neck and anything he can't reach. I even slept on the sofa with the patient a couple nights. Tim took him out in the snow, which Tashi loves to dive into head first. He became a live doggie SNOW CONE. Poor guy is on the mend. 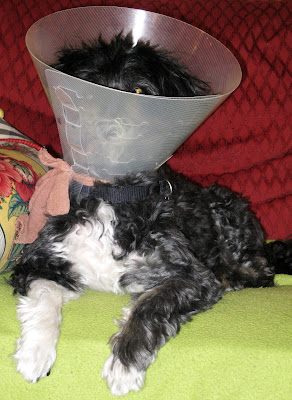 My third fabric collection is finally finished and off to the Powers That Be, er, Kathy. My second strike-offs should arrive in Kathy's hands today. Don't think I'm lounging on the sofa with Tashi. Got a few things up my sleeve.
Posted by Unknown on Monday, February 23, 2009