I hope you all had a wonderful Christmas. We had a Wii bowling marathon here and 7 yr old Wyatt put us all to shame. Today I should be running around getting ready before company arrives, but just had to post some Santa entries and a few photos of our tree. I made a tree skirt right before Christmas that really added that touch I was needing. I used lots of scraps mostly from my Flights of Fancy and Summer Soiree fabrics. These aren't the best photos, but hopefully you'll get the idea. 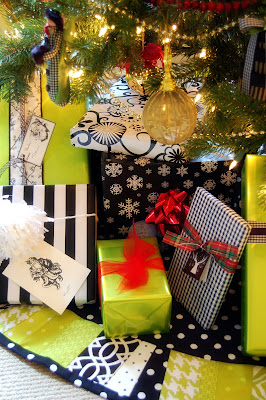 The harlequin clowns started a few years ago and when Wyatt was younger he was not too fond of them. They have a fun, yet sketchy appearance....you know, kinda like Santa. 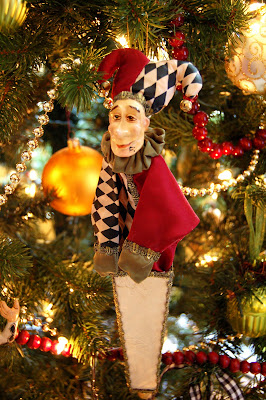 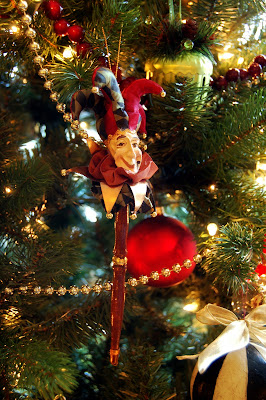 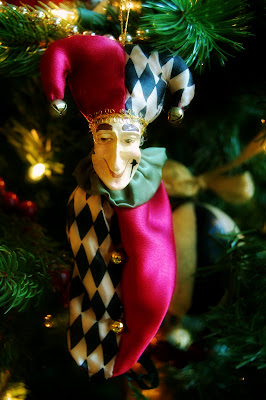 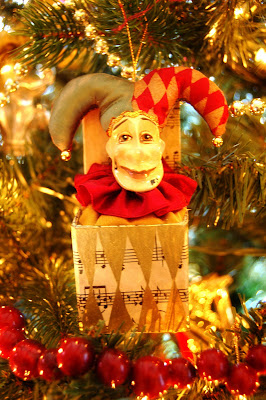 Victoria Findley didn't have a photo, but sent this great story:

Every year my daughter wanted to go to macy's to see Santa... Last year as they sweep you through she realized there were 4 rooms with santas to make the line go faster, then when she gave her list he didn't bother to look at it but shoved it behind his back... My daughter being clever had written on the letter, " please sign here when you come on Christmas...."once we left I had to sneak back in there to get her letter so that it magically appeared signed on Christmas.... Later she said, I know that wasn't the real Santa... He didn't smell like Christmas, he smelled like sweat and body odor... She didn't ask to see him this year. But she has written another letter for him to sign... I'm guessing to double check the signatures to make sure it was real!!!


Note: Do you think she's watching too many CSI episodes? She's probably even thought to have Santa's milk glass tested for DNA. My kinda gal!


Here's another story (has nothing to do with the photo) that is a must read. 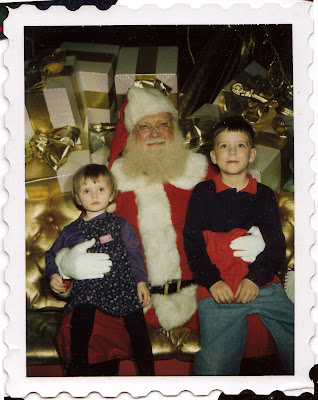 Thanks for the great idea of posting Santa photos! I've really enjoyed reading through them, and your own story is HILARIOUS! Honestly, you should win, but, then, where's the fun in that? :)I don't have a photo to go with my story, so I'm including a "normal" Santa shot of my own children. Hope you enjoy the story, none the less.


I can remember things from when I was really young. Like going to see Santa. He lived in an A-frame shack that was put up in the town square next to the fountain. With my dad carrying me, we opened the door, stepped in, got within three feet of the big jolly guy, and I started screaming and climbing up and over my dad's shoulders and on top of his head. I know I was really young because he still had hair then. Come to think of it, I could be the reason he went bald... Anyway, I was apparently headed for the rafters and was going to swing my way outta there like a monkey. There are no pictures of me with Santa. Go figure. What does it mean that I'm now 50 years old and still traumatized by the event? Worse, what does it mean that I endangered my own children's mental health by putting them on Santa's lap for a photo shoot? Therapy? Yea, I'm thinking about it.Merry Christmas. Amy Menges 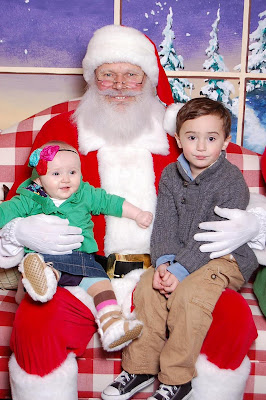 Well, we went to see Santa yesterday, and I just can't get over my son's face in this picture. He is going to be 3 next month, but he looks so completely bored! My little girl is 7 months and is oblivious to whats going on. So here's my entry...its not NEAR as hysterical as the others, but I thought I would give it a try... just by chance I might win some material, because I LOVE your material! :) Also, thank you for stopping by my blog the other day. You are so right, the first nativity scene wasn't elborate, thank you for reminding me. And I really love your daughters birthday cake for Jesus idea, I will definately use that in the future! May God bless your Christmas season. Amy Miraflor http://www.miraflorfamily.blogspot.com/
Enjoy your holiday!
Posted by Unknown on Saturday, December 26, 2009