Wyatt ended up at the ER last eve.  He fell off some play equipment and punctured a hole in his leg.  No images required, you get the idea.  But it's those precious phonecalls between us that I just want to preserve forever.  He was telling me every detail of his first experience with getting stitches, but somewhere in there he interjected that someone he knew had to get her "earnoids" removed.  I was at a dinner party and talking to him on my cell phone and my brain was trying to make sure that's what he really said and find the right word for him cuz I didn't think humans had a bodypart by that name.  All I could think of to replace earnoids was ear lobes and asked him if thats what he meant and he says yes.  Okay, you know I have ADD, right?  I quickly try to figure out why the poor girl had to have her ear lobes removed.  Then I remember way back in high school these two girls getting in a catfight and those big hoop earrings were all the rage.  Again, no images required.  I am still talking but my mind got really fixated on the poor girl Wyatt casually mentioned.  By the time he put Jennifer back on the phone I was just as interested in the lobeless girl as I was about Wyatt's stitches.  "He meant adnoids, mom".  Why am I still laughing?


We have been trying since Spring to remodel our guest bathroom.  Sometimes Tim and I will have a discussion and what I think as a nice idea he thinks of as a new project needing to happen.  Not like we need another project, but next thing I know he was up there and had already stripped the hideous 1970's Kmart quality wallpaper.  I hurried and took pictures because I started this blog called Show + Tell in 2008 because that's what I intended to do; Show + Tell my various Before and After projects.  So now we're moving into August.  Tim travels extensively and when he does get home there are lots of other things needing immediate attention from my Mini Macgyver.  He just got back last eve from Canada.  Pulls up to the dinner party already in progress and the BMW just starts freaking out electrically.  The alarm was going off, lights flashing, etc. and it just won't start.  We had to leave it there and will be dealing with that this weekend.  Then our home phones are not working and ATT's website is down (calling them is no better as "they are experiencing high volumes of calls", the sprinkler system is broken (90 degrees every day) and the bedroom fan is broken (don't tell Nate or Vern that we have ceiling fans and like them).  Last weekend Mini Macgyver did try to work on the bathroom.  Got so far as the basement to get to the crawl space to turn off the water.  he found we had a water leak from the outdoor faucet which took 2 days to repair.  I know many of you have the same plight with these fixer-uppers and renovation projects.

So I have actually made a vignette outside the bathroom door to remind myself that someday, somehow it will look better.  And because you are so diligent to follow my projects, of which I don't have any completed to show you, I am going to give you a sneak peek at the before (no puking, please) and the hopeful after. 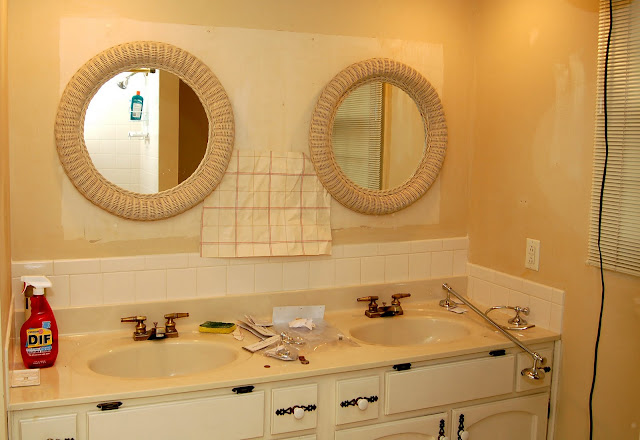 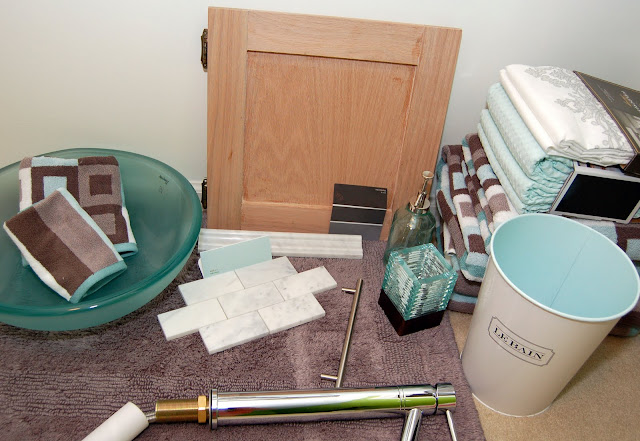 Notice the lovely country blue, mauve and tan plaid paper I snatched out of the trash for you to see what our guests have been looking at for 11 years? It's actually Tim's bathroom most of the time, so you can imagine how eager he was to remove it.  He is making all new door and drawer fronts and I will be painting them a dark expresso...someday.  So there you have it, one more half finished project brought to you by Paula Prass.  I will keep you posted.
Posted by Unknown on Saturday, July 31, 2010