THE EPHEMERA OF OUR LIVES

Tim's mom has lost her long battle with Alzheimer's.  We were so thankful to be able to visit her one last time in Michigan recently.  I chose this photo of her back when she was Charlotte Jackson, the Snow Queen in college.

And here is a photo of her then "future" husband, Paul Prass, who named his P-38 QUEEN JACK.  Not that I want a fighter plane named after me, but that is so cool, don't you think?

I have been swept away as I sort through, organize and scan the boxes of family photos, albums and letters that Tim has inherited.  The wealth of his family history compared to the half filled manila folder that contains my entire past leaves me breathless. 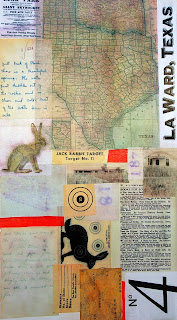 So I got this idea to turn some of these photos into collage artwork.  I started with Char, but was not pleased with my initial experiments.  So I changed gears and played with a photo from Paul's childhood that really makes me smile, especially knowing him as an adult. That rifle has to be twice as tall as Paul.  I'm guessing he's only about three years old here, living on a farm in Texas.  No siblings, his friends are the animals.  He had two cows Pete and Repeat.  So I made copies and applied the notes from the backs of photos, maps, paper rifle targets, pages from his children's books and any ephemera relating to his life on the farm in the 1920's to a 12"x30" canvas as the foundation.

Then I began painting over top of the foundation, letting some of the background peek through.  I'm still painting and adding layers to this piece that portrays my father-in-laws early years but something really hit me about the process.  I began thinking about the ephemera of our lives; those things that were meant to have no lasting significance, but in fact, became the foundation of who we have become.  It's those words scribbled on the back of a childhood photo that instantly transport us to that time or place.  Or how about the invisible cruel words that still impact us years later; they all become part of our underlayment, our foundation.  We can't choose the background, but we have the ability to design what our self-portrait will look like.  So it's true when someone says, "You are a piece of work".

things that are important or useful for only a short time  : items that were not meant to have lasting value

1  : something of no lasting significance

2  : ephmera plural : paper items (such as posters, broadsides, and tickets) that were originally meant to be discarded after use but have since become collectibles. 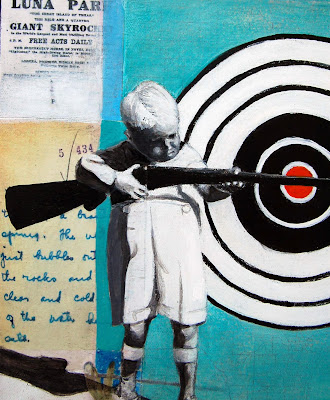 On a side note: I took this into my abstract class to work on (it's as close as I have been able to get to abstract) and one lady told me she found it disturbing on several levels.  Tried to explain this was Texas in the early 1920's, no other kids around, etc.  Then she said, "You're not going to try and sell this, are you?"  This is the same class that encourages creating what pleases you and not others.  I'll just add that comment to my self-portrait background.  Sigh.